This cake was ordered for a little boy who was turning 3 last week.  His mother wanted a modest celebration cake to share with his preschool class with the image of his favorite character–Curious George!  She asked for a simple design on a square cake with a picture of Curious George on top and fondant balloons spelling out his name.

I did the image as a frozen buttercream transfer. I found a picture I liked, sized it to fit the cake, and traced it onto waxed paper with buttercream icing. It’s almost like making the picture in reverse, as you put the details “closest” to you down first (i.e., the face, etc) and build up the icing on top of that. In other words, the whole thing is flipped over in the end, with the buttercream that’s directly on the waxed paper being the image you see on the cake (make sense…?  Probably not….).

During the process, the entire thing was put into the freezer in between colors to keep the buttercream from smearing together…thus the term “frozen buttercream transfer.” It’s actually an ingenious way to get any picture you want on a cake without piping it on freehand.

Anyway, it’s a 2-layer 9″ square chocolate cake iced with vanilla buttercream. After transferring the image to the frosted cake, I added green grass to the top and colorful buttercream balloons on the sides.  The wired balloons, letters and number are all made from homemade marshmallow fondant. 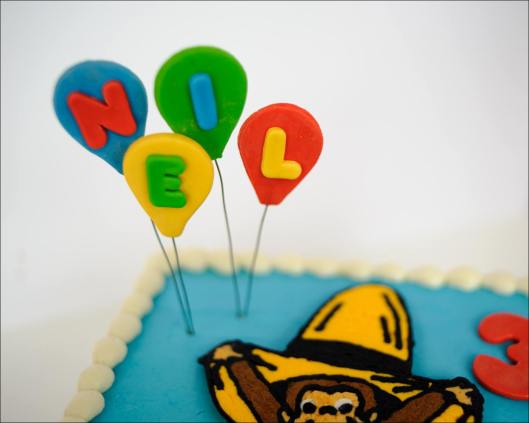 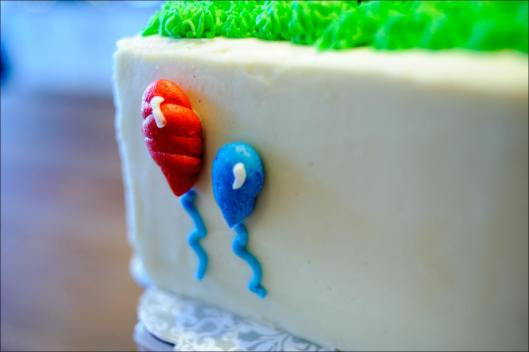 It was a fun cake to make, albeit a bit challenging to get the little face just right.  He’s such an iconic image with a face everyone recognizes, right!?  Not just any old monkey! I mostly wanted the kids to know who it was (and they did!).

Happy birthday, Little Neil!  I hope you had a great 3rd birthday!

Life is crazy and I love to bake. I'm a wife, mother of 3 nutty kids, and an admitted sugar-holic. Ten years ago I left my job as a senior consulting engineer in Salt Lake City, UT, to get out of the rat race and raise kids. We up and moved to a quiet, small town in NE Ohio to be near family and bought a 180-yr-old historic home, always a dream of mine. Along the way, I discovered my joy of baking, which allows both my engineering side and my oft-suppressed creative side to emerge. It began with the desire to bake birthday cakes for my kids (I hated to buy them) and has blossomed into a cupcake-baking business for a local bakery. Over the years, many people have asked if I take orders. So, here they are. Check out the site, we'll be adding new cupcake flavors weekly as well as the occasional cake. And in case you're wondering about the name, it's an homage to the big, old gray barn in my back yard. What a bonus, it came with the house! Put on a smile and BAKE!